About Us Newman Centre 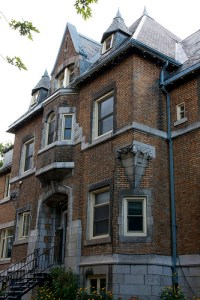 The Newman Centre of McGill University is the Catholic chaplaincy at McGill University. The Centre is named after John Henry Newman, a former Anglican priest and Catholic cardinal whose writings on the importance of campus ministries for Catholic students attending secular universities inspired the creation of the Centre as well as many other such centres located at universities throughout the world. A list of Newman centres is available on this Wikipedia page.

The Centre has a long and rich history, beginning in 1897 with the founding of the the Loyola Club for Catholic students by Rev. Edward J. Devine at St. Patrick’s Church. The Club’s name was changed to the Columbian Club in 1907 and to the Newman Club in 1929. In 1949, Fr. Gerald Emmett Carter, who was then leading the Club but would later go on to become Archbishop of Toronto, purchased a building on McGill College Avenue to house the Club. In 1951, a group of Newman alumni and other Catholics founded the Newman Association of Montreal, Inc. to finance and operate the Club. In 1954, the Association purchased the former Whitehead mansion at 3484 Peel Street (pictured to the right), which remains the Centre’s home to this day. For more information about the Centre’s heritage, Peter F. McNally, a retired professor of history at McGill University, has prepared a detailed history of the Newman Centre.

The Newman Catholic Students’ Society is proud to call the Newman Centre its home, and it is where we hold most of our activities. In addition, a number of our executives are often residents at the Centre. We simply would not be the club that we are today without the extraordinary generosity of the Newman Centre administration and the Newman Association of Montreal, and we are immensely thankful for their support.

More information about the Centre is available on the Centre’s website.