Reflections of a Newman Alum: Emily

My name is Emily Erkkinen, I graduated from McGill in 2013, and I am now a first year medical student at the University of Massachusetts Medical School. During my time at McGill, I was highly involved with the Newman Student Society, and was president of the Newman Students’ Society during the 2011-2012 academic year.

When I first arrived at McGill in 2009, I knew no one, and I found out that essentially everyone in my res was going to a different freshman orientation than me. I felt foolish for signing up over the summer to do a Christian “alternative” Frosh (Fish Frosh). For much of Fish Frosh, I remembered feeling like a fraud. I had been raised in a non-practicing Catholic family, in which I completed my Sunday school education in order to appease my grandparents. I had little faith, much doubt, and a head full of questions. Yet something about the community I experienced during Fish Frosh gave me the courage to go to Mass at the Newman Centre that first Sunday in Montreal, even though I had little idea of when to sit, stand, kneel or what the responses were during the service.

I was so surprised when the Newmanites I met so readily invited me to be a part of the NSS council, have dinner with them, go on retreats, or just straight up hang out. I wondered how they could not see my blatant fraud-ness.

Looking back on it, the verse “I was a stranger and you welcomed me” comes to mind. There is this amazing Christ-like love in the community of the Newman Centre. There were people there who took the time to listen to my difficult questions about Catholicism, there were talks, Bible studies, and retreats, for my faith to grow. I had never before found myself in the company of such overwhelmingly kind people.

When I look back on my time at Newman, so many happy memories come across my mind. There was the time during the Fish Frosh pancake breakfast at Newman when I sat across the table from the classmate who would later become my roommate and best friend. Or the time I made arguably the messiest Saturday Night Supper the Newman Centre kitchen has ever known, and yet the volunteers who took four hours to clean up after me somehow did not hate me. There were the many afternoons I went to study at the wood table in the library in Podles Hall knowing there would be fellow Newmanites there to keep me company. There were Linda’s delicious soups, Newman Balls, and three beautiful Easter Vigils.

While at the Newman Centre, I discovered my faith and learned the importance of community. Sometimes I feel sad, when I think of how my time at Newman is over. Yet every day I feel the joy that entered my heart while I was there, and I know I am carrying a little bit of Newman with me wherever I go 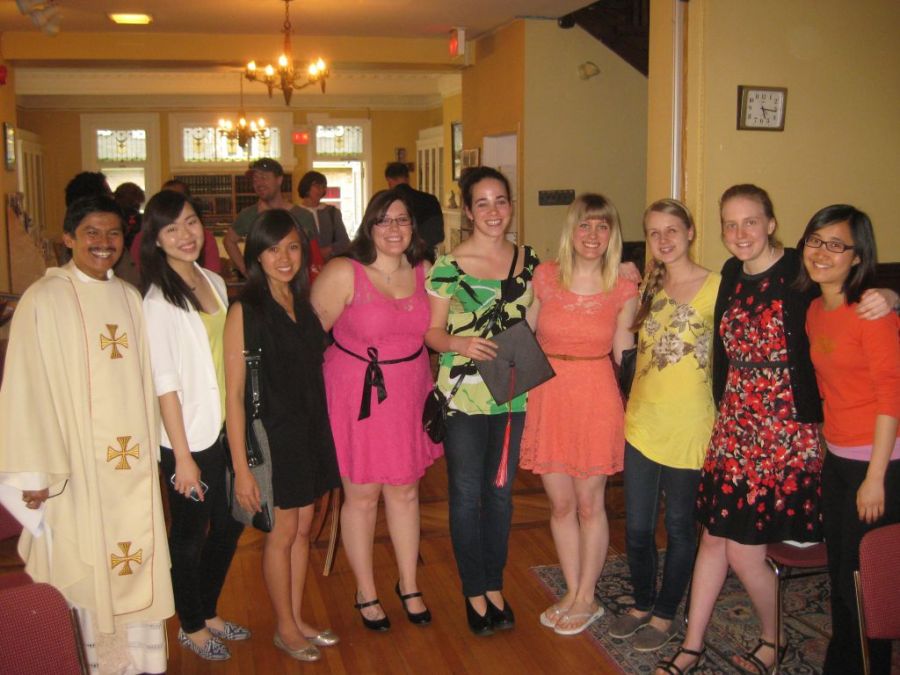